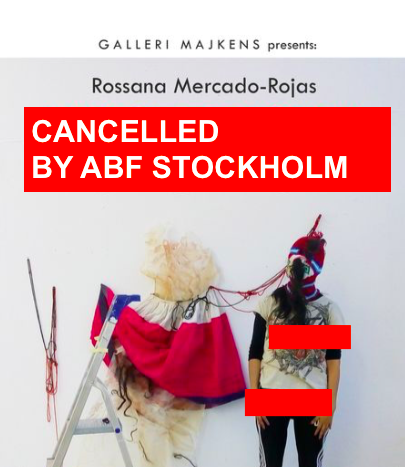 • MFA in Curatorial practices from the Konstfack College

• BA in Painting from Pontifical Catholic University from Peru.

Mercado is a board member of Galleri Majkens and her solo show HYSTERISKA HISTORISKA was the first one in a series of temporary exhibitions the gallery produced collectively at ABF Stockholm´s gallery space 29 Nov - 13 Dec, 2018. Unfortunately, ABF Stockholm closed down the exhibition the day after vernissage.

• Scroll down for the artist response and statement

Last year, in December 2017 Rossana Mercado Rojas did an artist talk about combining motherhood with her art practice as a part of Galleri Majkens exhibition MOTHERS – The Personal is Political.

She has shown her work and/or managed several interdisciplinary art projects at venues in Perú, Sweden, Mexico and the US. Her work as curator and cultural manager led her to focus on the problematic and possibilities of public space. By 2012 she starts the women artists collective Hysterix that focus on activism through multidisciplinary interventions at public spaces. Since 2013, she is part of the cultural association PUNKU that investigates personal development and pedagogy through the arts in public spaces.

Mercado has been the administrator of the convergence house TierrActiva (COP20 and Cumbre de los Pueblos, 2014). She is co creator of the music festival at public spaces Malvinazo fest (2013).

Her main interests are public space, gender, empowerment and development through art pedagogy.

Hysterix is a women artist collective that focuses on activism through multidisciplinary interventions at public and private spaces. Hysterix holds transgression as main methodology and viscerality as core aesthetics.

Hysteriska Historiska is a project that started approximately one year ago after the invitation from Gallery Majkens. This exhibition was my second solo show in a gallery space after many years. The past eight years I have been working mainly in public spaces with my collective Hysterix (consisting of women artists), as well as my involvement in other activities with cultural state institutions as a curator, and producer.

The pieces in this exhibition reflect different states in which institutional violence aims to erase us women from writing- or taking part of history.

Linking the term “Hysteria” (Hyster = Uterus/ ungovernable emotional excess) with History (the study of the past as it is described in written documents) I aimed to contradict different states and layers in which the “ungovernable” was systematically oppressed, silenced and erased by patriarchal colonizing systems of control.

The process of making these pieces demanded going through my personal- and family history. I researched personal documents and explored alternative materials, such as materials derived from the human body, or actual everyday clothing from deceased family members. The process was harsh, painful and long. Yet, the outcome aimed to be festive with the struggle perceived as strength gained.

eight years of process in Peru for getting sole custody of my child, up until today with the ongoing migration process of bringing my son to Sweden. The words “father”, “god” and “husband” are repeated in a lot of the documents, even when the father is completely absent in these processes. The piece reflects the violence in which institutions force women to go through long evaluations that demand money, time, and emotional waste in order to reinforce the “pater familias-figure”, where a family is incomplete without a father, without a husband.

I covered these documents with tracing paper, on which I drew portraits of my son using cooking oil. Portraits of how I remember him when these events occurred. They were based on the absence and remembrance of how I think and feel about my child on top of the documents that foster his absence.

The second installation “Penurias, pick a dick” depicts a shadow painted with organic tint and blood. This is based on my silhouette projected onto the fabric – a process that symbolizes how the female body is viewed and interpreted by others. Our bodies coded as fragile or inviting to violence and sexual abuse – starting at a young age. Our bodies in the view of strangers, of family, and of people you need to put your trust in. They remain without faces, in anger and in fear. The unclear state of the silhouette poses questions such as: how do we “portray” ourselves when walking on a dark street in order to stay safe and not to provoke? How can we “draw” ourselves when going to the police, in order to be taken seriously in front of authorities? How does our body language make us look like we are asking for it when we “project” ourselves onto institutions of safety and protection?

Attached to the fabric with the silhouette is a group of knitted colorful penises. They are placed on the floor, looking fragile and soft. Demanding penises that want to be respected, feared, touched, taken care of, seen, sucked, and loved. Penises the audience on the opening night was invited to step on.

The third installation “Vida Bohemia - Rossanaconda” is a homage to my great-grandmothers. In my family´s history they are mentioned and remembered as the impoverished and uneducated past. The past we should be ashamed of in order to fully adapt and be accepted into “wealthier” environments.

I perceive my great-grandmothers to be the turning point for my own family´s history and also in a collective context dealing with the situation of indigenous communities in my country. Which also reflects the general history of how whole cultures were planned to be erased using different argumentation in each case.

The idea of racial and cultural hierarchies stems from the power of colonial storytelling –portraying the indigenous population as dirty, obscene and uncivilized savages. Stereotypes of ‘uncivilized’ people were at times further framed within an evangelical context, allowing European military forces to present their conquest of ‘savages’ as divinely ordained: a colonial military doctrine. During 1969, the agrarian reform was implemented in Peru to take the Haciendas from the patrons (Spaniards or Criollos) to give them to the working-force: the indigenous-farmer communities. By doing so, the silenced objectified working-force regained a voice, at least on paper.

During the Fujimori government (1990-2000) around 294 000 women were sterilized in Peru. Most of them were Andean women on the grounds that they were the uneducated poor that would only breed more poor to the population. This was Fujimori´s strategy to manifest a progressing country on the path to success.

For “Vida Bohemia - Rossanaconda” I built a sculpture of my great-grandmother with a metal skeleton as a base, positioned as if it was dancing the Huayno (a folkloric traditional Andean type of music), then I built the organs with materials such as soft fabric, yarn, paper, and plastic. I made the skin with transparent delicate fabric tinted with wax, hair and blood – blood of my blood. The sculpture wears a pink skirt that was given to me as a gift from my grandmother and I have brought this skirt to different celebrations around the world. There are four old monitors surrounding the sculpture showing images of women, colleagues, and friends from Peru, Bolivia, Chile and Sweden celebrating in different cities such as Lima, Visviri and Stockholm. The audio of this installation alters from songs by the Andean folk diva Flor Pucarina to distortion- and techno queer noise. Framing the piece is hand-written text covering the walls on which I have cited a poem that starts with: “I’m the savage, the otherness / I´m the savage, embodied complexity / I’m the savage you discover in her own lands / I’m the savage you raped and kept as a slave”.

Hysteriska Historiska aimed to touch upon urgent issues and at the same time project an over all festive tone. The vernissage was colourful and inviting. During the opening ceremony we had live painting where a lot of young girls participated. Just before that, Natalie Högström and I read the text “Poner el cuerpo: Om performance” which is about the embodiment of women´s political resistance and how we approach that through performance as an art form.

This project gathered not only my personal work but also the effort of different women involved in different aspects of the whole exhibition and its processes.

We showed video works by Paola Torres Nunez del Prado, Angélica Chávez and Ami Kohara. Their works touched upon the topics described above from different angles, such as the submission demanded of the colonized population until current times and the body of women as a work-force, neglected and objectified.

Other women were also present in my own installations. In Vida Bohemia: Angélica Chávez, Cecilia Rejtman (from Hysterix), Sara Sanjinez (Bolivia), Margarita Kalfio (Mapuche activist), Josefina Jimenez (Peru) and other sisters brought great joy and strength to the work.

For the piece “Penurias, pick a dick” Lotta Hedin and La Wara collaborated with the knitting process and were set on participating in the “knitting-confessions-workshop” that was meant to happen during the exhibition period.

Last but not least, the entire exhibition design with scenography, press and curatorial texts were made by Marie-Therese Luger and Magdalena Blom from Galleri Majkens. Together we created the festive-looking aesthetics: combining selected materials of shades of pink and purple assembled on site in the ABF-house gallery.

After just one day, the exhibition was abruptly cancelled over a phone call made to Magdalena Blom (founder of Galleri Majkens) by representatives from the ABF-house. Due to their unwillingness to meet with us we were not given a possibility to discuss their decision before closing it down and covering specific parts of the title´s design (a vulva and a uterus) with immediate effect.

I am a member of two women artist collectives: Hysterix in Peru and Galleri Majkens in Sweden. I feel baffled by the fact that with Hysterix, we are used to being shut down by different types of authorities in the middle of a process of creating street art in the public realm of Lima. Not only while painting and performing, we are usually confronted about the discourse and content of our work. However, this time around, I felt safe to exhibit at ABF: Sweden´s Workers Educational Association´s open gallery space –indoors yet public. My solo show was also the first project Galleri Majkens took on as a collective board. So it really came as a shock to me that a renowned nationwide organization could behave so aggressively towards us.

While in Peru, as in many “third world” countries we fight against physical and critical violence towards women (with a high rate of femicides), could it be that in countries like Sweden women struggle with the every-day, passive-aggressive violence in the shape of diplomacy and bureaucratic silence by laws and legislation? Is this all in the same thread? Is this all about a patriarchal system doing what it does simply because it can, and nobody wants to address these matters?

The fact that ABF denied us a proper dialogue before executing this abrupt decision reinforces the urgency of having platforms focused on women and intersectional feminism. Spaces where we can openly talk and make work about issues relevant to us, such as the society´s over all control of our body and behavior, and how it affects us in different areas and stages of our life, without fearing to be censured or erased from the public sphere.

I can’t help but wonder if this situation could have turned out differently if we were a group of men? What if we weren´t calling ourselves a Feminist gallery? What if we were less loud? Or, what if I was a Swedish artist, would this have been handled so fast and without any hesitation?